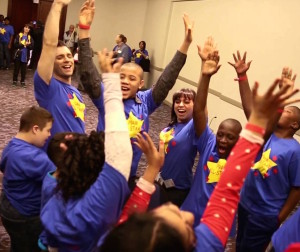 Many clinicians who work with students with autism spectrum disorder (ASD) face difficulties with getting them to respond appropriately to various social situations. Often, we make our best attempts to simulate “live” social situations with structured group interaction, social stories, and other forms of intervention. Recently, there have been some studies recommending an option that’s been around for centuries, theater.

Skills that are mostly developed in theater are exactly the skills that most students with ASD lack: flexibility of imagination, communication, and social interaction.

Currently, there’s an acting based intervention called the Social Emotional NeuroScience Endocrinology (SENSE) Theatre project. It is designed to improve socioemotional functioning and reduce stress in children with ASD. It is currently only in pilot stage but it has already seen some encouraging signs of effectiveness. The sessions are similar to those that most people are familiar with regarding acting. Sessions include role playing, improvisation, script reading and full scale performance of a play. The key metric that the project looks at is social perception and interaction skills. Early results have shown that students have increased social awareness and perspective taking.

SENSE is only in its pilot stage but there are several other resembling programs that are reporting similar results. Only current and future studies will give us a definitive answer on the benefits of theater. However, I can speak from personal experience on the benefits of theater with two students of mine. I have seen improvement in their social interactions and specifically increased abilities to read facial as well as social cues and adjust accordingly. In my opinion, theater forces the students to take on so many different perspectives and variations that they quickly adapt abilities to adjust thereby increasing their flexibility of thinking. I’ve also found that they’re able to react to humor much quicker than previously observed. These are just some of the benefits that I’ve seen from my students.

Of course, I’m sure some of you may think that a theater class with scripts and full scale performances may prove difficult for some of your students. After all, memorizing lines may create extra anxiety. However, one of my students only participates in the improvisational sessions in class. The teacher doesn’t require her to memorize scripts. Therefore, modifications to the course may need to be implemented to suit each individual’s needs.

So, if you’re at a site that has a theater class, I would encourage you to recommend theater classes for your students. If you don’t have those types of resources at your site, recommend some outside theater camps to parents. Remember, the goal for the student is not to become the next Leonardo DiCaprio or Jennifer Lawrence. The goal is for them to be able to interact with DiCaprio and Lawrence and be included.