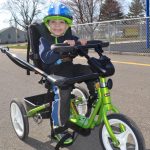 Learning how to ride a bike can foster a sense of independence and competence, causing a ripple effect in other areas of life.  Last year the Friendship Circle worked with bike companies around the USA and hundreds of private donors to provide 108 adaptive bikes to deserving children and young adults.  This year the goal is to give away 300 bikes.

The Great Bike Giveaway was born from a desire to “pay it forward.”  It all started with a phone call to the Friendship Circle in the summer of 2011 from an individual who wanted to give a bicycle to a needy child – because he himself had once been a needy child who received a brand new bicycle from a stranger.  Donor Mikhail Reytsman recently recalled the story of a small gift that keeps on growing:

“We were in the country for probably less than a year at the time.  We came over from Russia in a refugee program, and the Jewish community was helping us to re-settle in the United States. At some point, they mentioned that there was a gentleman looking for a kid to give a bike to.  Just a free bike, no strings attached.

Somehow I got volunteered for that.  He wants to give a bike to somebody who can’t afford it? Well, OK, I guess!  He took me to the store and said, “Pick a bike.”  I picked a bike, and he told me his story. When he was a little kid, he really wanted a bike and he couldn’t afford one. Until one day his stepfather just presented him with a bike – out of nowhere as a gift from a stepfather to his stepson.

That was the highlight of his childhood. That bike allowed him to go anywhere.  He could visit his friends.  He promised himself that he would return the favor, give another kid a bike before he would turn 30. He mentioned that, he couldn’t do it on time before he turned 30, because he was sick.

So now finally he had enough money and enough time, and he wanted to make sure that somebody got a bike. The only condition was that I promise that before I turn 30, I would give someone else a bike as well: it’s important to keep the tradition going.  It was started by his stepfather, and he asked me to continue.  Never heard from him again, never saw him again, never knew his name, but his only request was to make sure that the tradition keeps going.  It was probably 1995, maybe 1996 at the latest.  When I was getting close to 30, it was time for me to give somebody a bike, because I promised that gentleman.

I started asking around, “Is there anybody who would actually want a bike?”  I asked one of my neighbors, who said, “I don’t know anybody, but if you check with the Friendship Circle, maybe they would be interested.” 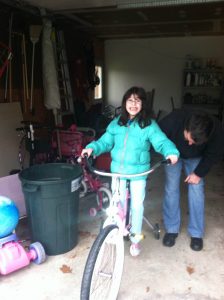 So I called the Friendship Circle, and they said, “Yes, it sounds interesting, yes, we’ll look into it. We’ll let you know if we can find a kid.”  Eventually they called me back and said, “We started a huge Bike Giveaway.  We finally found a kid, and the bike would make a difference.”

It is a life-changing experience. You always think of the big, huge donations – somebody gives $1 million, $2 million – but when you realize that only $100 can make a difference, it really changes your perspective.  And when I learned that you turned it into a bigger tradition, to me it was an amazing story about how one guy so many years ago got a small gift from his stepfather and created a ripple effect.  When you showed me how many bikes they’re giving away, it was unbelievable!

And to me that was the meaning of the bike experience. To me it was the experience of being able to change somebody else’s life. Maybe not much money for me, but a huge gift to someone.  We start with $100 from that gentleman, now it’s 300 bikes!  So it’s a story of how $100 can make a huge difference in so many lives.”

Donating to the Great Bike Giveaway is a beautiful way to perform a random act of kindness that will have a lasting impact on a child’s quality of life.  Won’t you help to continue the tradition?

Posted in Special Education Articles
← What an Individual with Special Needs Can Teach Us About True Love25 Simple changes you can make for disability awareness! →